Ideal for visiting islands like Mljet, Korčula, Lastovo and Šipan 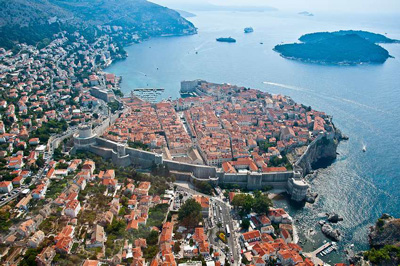 Dubrovnik in Croatia, is an ancient walled city and one of the most preferred tourist destinations in Croatia. This city of only just over 42,000 people (as per the last census conducted in 2011) is so beautiful such that it made it to the list of the World Heritage Sites in 1979. This city has a rich history and museums that date as far as the 7th century.
Transportation into and within the city:The city boasts an international airport that was in 2014 the third busiest in Croatia. The airport, situated about 15.5 Km from the city center makes it possible for tourists to come directly to Dubrovnik. Within the city, there are modern bus services, running 24 hour services, that ferry people to the old city and within Dubrovnik.
Activities: The best time to visit the city is in May – June. You get the chance to explore the amazing town without the kind of human traffic that is experienced from July to Aug. While here, visit the breathtaking Rector’s Palace, Minceta Tower for the best view of the famous walls of Dubrovnik and the numerous churches, among them Franciscan church and Monastery. Sample sea food made the Croatian way at Bota Sushi & Oyster Bar and Proto then unwind with some dance and music from Divino Wine Bar and Buza.